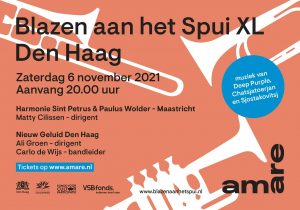 A brand new concert venue called Amare, two top orchestras and a rock band all ready to test the acoustics of the hall with a blaze of sonic fire. These are the ingredients for the concert “Blazen aan het Spui XL” on Saturday Nov 6th at the Amare Theatre, Spuiplein in The Hague. After the enforced corona stop the musicians of Harmonie Sint Petrus and Paulus from Wolder – Maastricht and The Hague based wind group Nieuw Geluid are looking forward to performing for their public again. With a total of over 150 musicians they will open the newseason for the concert series “Blazen aan het Spui”, which aims to promote symphonic wind music in the Hague.

Nieuw Geluid is a group consisting of experienced amateur musicians, conservatorium students and professionals. Together with their conductor, Ali Groen, they will once again introduce new sounds to The Hague’s music scene. World known Hammond organ virtu

oso, Carlo de Wijs, and his specially formed band will join the wind band to perform the epic Concerto for Group & Orchestra composed by Jon Lord for Deep Purple and The Royal Philharmonic Orchestra. This concerto from 1969 is a groundbreaking composition which left

a lasting impression on the musical world as one of the first examples of a cross over between classical music and rock. The unusual background and stories behind this work – including the reconstruction of the lost score by the Dutch guitar player and composer, Marco de Goeij, will be explained before the concert by Radio 4 presenter Ab Nieuwdorp.(in Dutch only)

The symphonic wind orchestra Harmonie Sint Petrus en Paulus from Wolder-Maastricht became world champion in the highest division of the World Music Contest in Kerkrade in 2017, the Olympic Games of symphonic wind music. The orchestra was praised particularly for its rendition of Stravinsky’s Rite of Spring. This time the orchestra will play magnificent symphonic music of Shostakovich (Finale from the 5th Symphony), Dvorák, and a beautiful version for wind orchestra of the famous song Zueignung by Richard Strauss. Rock music by the Irish band U2 will also feature as an inspiration for the composition ‘Aurora Awakes’ by the American composer John Mackey. The Belgian conductor Matty Cilissen will lead the orchestra.

We use cookies on our website to give you the most relevant experience by remembering your preferences and repeat visits. By clicking “Accept All”, you consent to the use of ALL the cookies. However, you may visit "Cookie Settings" to provide a controlled consent.
Cookie SettingsAccept All
Manage consent

This website uses cookies to improve your experience while you navigate through the website. Out of these, the cookies that are categorized as necessary are stored on your browser as they are essential for the working of basic functionalities of the website. We also use third-party cookies that help us analyze and understand how you use this website. These cookies will be stored in your browser only with your consent. You also have the option to opt-out of these cookies. But opting out of some of these cookies may affect your browsing experience.
Necessary Altijd ingeschakeld
Necessary cookies are absolutely essential for the website to function properly. These cookies ensure basic functionalities and security features of the website, anonymously.
Functional
Functional cookies help to perform certain functionalities like sharing the content of the website on social media platforms, collect feedbacks, and other third-party features.
Performance
Performance cookies are used to understand and analyze the key performance indexes of the website which helps in delivering a better user experience for the visitors.
Analytics
Analytical cookies are used to understand how visitors interact with the website. These cookies help provide information on metrics the number of visitors, bounce rate, traffic source, etc.
Advertisement
Advertisement cookies are used to provide visitors with relevant ads and marketing campaigns. These cookies track visitors across websites and collect information to provide customized ads.
Others
Other uncategorized cookies are those that are being analyzed and have not been classified into a category as yet.
OPSLAAN & ACCEPTEREN